One of the things that I like about Brighton is the abundance of Victorian architecture . It's so flamboyant and colourful !
On a recent trip I spent some time just west of the pier, here the Fisherman's museum is situated under one of the Victorian arches of Kings Road. It's an interesting spot with  fishing boats and fresh seafood for sale as you can see in the photo above.
Next to the museum is the Smoked Fish shop and cafe where I decided to stop for lunch.
Sitting on the wall outside I was kept amused by the mischievous antics of a seagull. 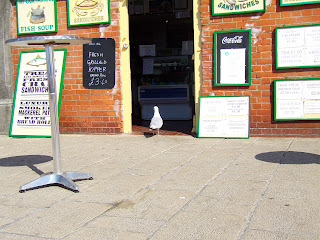 He would take a few steps into the fish shop, look either way then quickly run out again. He kept this up for about ten minutes until he eventually realized that he wasn't going to be able to steal anything. The seagulls must be a real nuisance to them but it was very comical to watch.
The fish shop is adorned with a variety of signs and boards just like the cafe next to it. They're both a little quirky in appearance and blend it perfectly with their Victorian surroundings.
Originally I was going to paint them separately but because of the sloping path above them it meant that the dimensions would not work well. So I am painting them on a canvas 24"x 12" ....
There's quite a bit of detail to cover and although progress is slow it's very enjoyable to paint.
Work in progress......

....and finally after an awful lot of painting, it is all finished ....

The Summer is starting to fade away, the evenings are getting darker and the wonderful sunny days are getting less. This however does not mean I'm ready to leave it behind.... I will have to be dragged kicking and screaming into the Autumn !
I am so very reluctant to leave the Summer colours and sunshine that have inspired me over the past few months. So much so that for now I shall continue with my very own extended Summer!
My latest painting came about after watching the seagulls on Brighton beach. They get some very bad press but most of their misbehaving is brought about by people feeding them.
Their antics can be very amusing and love them or hate them Brighton just wouldn't be the same without them!
"Seaside Seagulls"
Acrylic on canvas 20"x 16" 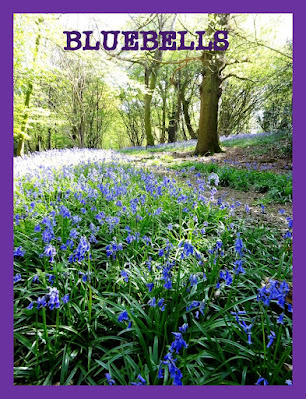